Petit Mal by Race Horse Company is a one hour-and-fifteen minutes circus performance featuring superb skills on the trampoline and Chinese pole. Here I wrote about how two performers set-up a half-an-hour circus show in a street performance in Gothenburg. In Petit Mal, we get clowning, acrobatics, and break dancing spread out amongst merely three performers. During one of the last tricks, the trampoline artist Rauli Kosonen lost his balance standing on eleven rubber tires (yes, I counted as I held my breath), but got back on after two attempts. He closed his eyes hard before bowing to the audience at the end of the show. The three of them looked absolutely knackered. It’s a performance about the chaotic and the bizarre held together by energy, strength, and perseverance to carry it through.

I really enjoyed the element of “losing control.” The breakdancer Kalle Lehto eventually cuts one of the wires holding the Chinese Pole. When he took out the pair of gigantic scissors a teenage girl behind me said, “Oh, no you don’t,” then gasped loudly when he cut the wire. Blue fitness balls hang in an orange net from the ceiling. These fitness balls are released from the net during the middle of the performance, and create further spontaneity as they roam freely, some of them even rolling off the stage. All this happens on a stage that resembles an outdoor factory workshop where the performers throw wood planks carelessly here and there, or move rubber tires around in a random fashion.

Kosonen is superb, showcasing his trampolining skills on the trampoline and a huge red fitness ball. The flashing lights at the end was a new experience for me, as I realized that flashing lights give the illusion of stillness, prolonging the shapes in the air by a split of a second because of the way our eyes capture light. Petri Trominen is breathtaking on the Chinese pole, making the big drops and turns in the air look effortless and seamless. Lehto’s breakdancing is enhanced by sound devices underneath the wood planks so we can “hear” his body movements as well as see them.

What didn’t work quite well for me was how they incorporated the element of bizarreness into the show. We got not one but two Elvis Presleys, Donald Duck, a Canadian mountaineer, and a horse with sexy legs. There were too many images and characters to process in one go, and by this point I lost a bit of concentration. I couldn’t see–and still can’t–the connection between Donald Duck and Elvis Presley. Maybe it’s not supposed to make sense. The show is called Petit Mal after all, referring to “absence seizure.” This section of the performance uses pink, orange, and green lighting to create a distorted, perhaps a hallucinated view of the world. But I think there could be a stronger connection established between these images and characters to hold the spectator’s attention.

Overall it was a very enjoyable evening. But be prepared to keep an open mind, as this is not a show about grace and beauty in an orderly world, but about letting the disorderly speak.

Pole Dancing at the Gothenburg Museum of Art 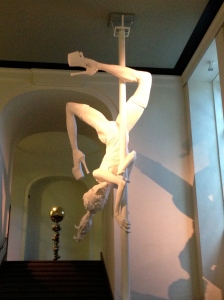 The Gothenburg Museum of Art had a huge rotating sculpture of a girl pole dancing at the entrance. This was the other nice surprise during my trip to Gothenburg.  I should’ve stood next to it to show how big it was.  I think this is one of the indicators that pole dancing is really becoming mainstream. The fact that this sculpture was placed at the entrance of an art museum challenges the perception of pole dancing being “low brow” art performance.  Academically, from the angle of cultural studies, the dichotomy of low brow vs. high brow has pretty much been dismantled, as almost any form of art and cultural activity can be studied and is worthy  of analysis.  But pole dancing has a stigma of being a crass and sexually provoking performance.  That side of the spectrum does exist, but the sexual and gender politics of pole dancing in modern life are much more complex to conveniently label it as such. 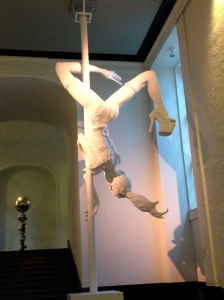 I love the body lines.

I learned a lot about pole dancing while doing online research on aerial.  I don’t know if pole dancing is normally categorized as circus or aerial performance, but there are a lot of similarities between pole dancing and aerial performance as you need to engage upper body muscles to lift yourself up in the air.  Plus, the amazing Felix Cane (twice pole world champion) performs for Cirque du Soleil, showing that pole dancing can be incorporated into circus performances.

Personally I’ve tried pole only once, and it was during our university’s Fresher’s week when the student clubs come out to promote.  A guy (yes, a guy) from the pole dancing club showed me how to do a move locking your left armpit on the pole, placing the right arm lower on the pole to lift yourself up horizontally.  (I’m not familiar with pole dancing moves at all, so if you know what this move is called do drop me a line.)  I thought to myself: hey, I do aerial, I have a pretty strong upper body, this should be a piece of cake.

I was wrong.  Even though I did manage to lift myself off the ground, I couldn’t do it horizontally.  This is when I realised that even though you’re using the same muscles groups, due to the difference in equipment you probably have to engage them in slightly different ways.

I used to think… and forgive me for having thought so, that pole was easier because the pole is solid and therefore it seemed that you have more to grip on.  I know, I know, I was WRONG. The more I read about it and the more videos I watched (that’s how I came across Felix Cane, Jenyne Butterfly, Natasha Wang and other super women), my perception towards pole dancing changed completely.  There is a sexual aspect to pole dancing, but to over-emphasise it is to overlook the training and hard work these performers put into it.  Performing pole outdoors in the summer is also a big challenge.  I watched an interview where a performer from Taiwan (temperatures can get as high as 35 degrees in the summer) said the pole heats up so much, sometimes she can smell her skin burning slightly from the friction on the pole.

I also learned about the danger of pole when I became friends with a certified pole fitness instructor. She wore tracksuits to a gig rehearsal that had flashing lights… looking back she has no idea why she wore tracksuits to rehearse.  She missed her grip when she got distracted by the lights, and the fall resulted in 13 stitches on her face.  After three months of rest she got back on the pole and continued to teach and perform.  Now she also trains on the silks and rope.

How can you not love aerial when you meet people like these?

I planned to visit an old friend in Gothenburg, Sweden after the viva.  It was meant to be a celebration trip, so I hesitated whether I should still go away on holiday after the disappointing result of major corrections.  In the end I decided to go because I hadn’t seen my friend in a long time, and I needed something to distract me from being depressed.  I had my viva on a Monday, so pretty much cried throughout the week and couldn’t leave the flat until Sunday.  The weather was incredibly sunny that day, the whole city was alive with the amount of people that came to enjoy the seafront.  I half cried through my lunch as I felt I couldn’t join in the season of summer festivities.

I managed to decide to go to Gothenburg anyway where my friend Fabiana lives.  I had a great time, and the trip dispelled the viva blues… Until I came back at least.  One of the nicest surprises was to see a free street circus show.  I only found out that I caught the annual culture festival in Gothenburg, and a number of events were free to the public.  We were on our way to Haga, an area similar to London’s Soho in vibe, when we caught glimpse of the performance from afar.  It was the last ten minutes of that performance, but we checked the time schedule on the board and were lucky to find that they were performing again at 6pm. 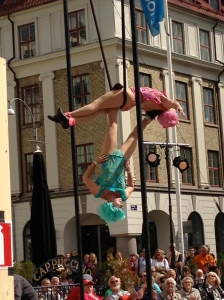 Doubles on the cloud swing.

It was only a half-an-hour performance, but I was impressed not only by their muscles (I want those muscles!), but also admired their choreography.  It was only two of them filling up half-an-hour.  One could tell they were experienced performers from the way they engaged with the audience and entertained them. There was no break within the half-hour, so they would take turns to rest while remaining in character.  The physical endurance required to perform the moves the way they did showed they were very skilled and strong.  As with Scandinavian summers the weather wasn’t very warm, so it’s more likely to get injured performing outdoors in those temperatures.  Circus and physical theatre performers make tricks look easy, it’s easy to forget the amount of training they go through to achieve that strength.  Fabiana is not a circus enthusiast as I am, but after seeing them perform she “advised” that I definitely need to build more muscles. 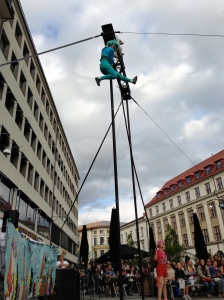 A move similar to the “flag” on the rope but on the Chinese pole.

I was also impressed with how they managed to play with different equipments in such a short amount of time.  They used the pole of the free-standing rig as a Chinese pole, the cloud swing as a rope, and the platform at the top of the rig to do something similar to an ankle hang on the trapeze bar. 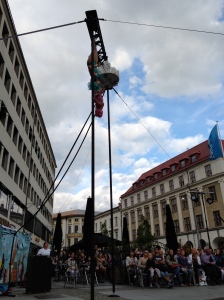 There was also acrobalance. 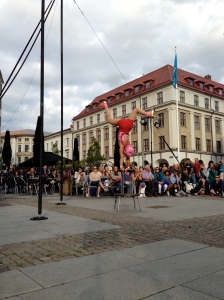 I usually don’t take that many photos during a performance because taking photos distracts me from enjoying the moment.  I think this time I clicked away to my heart’s content because it was such an unexpected nice surprise.  What I feel really bad about now is I’ve actually forgotten the name of their circus troupe!  The whole point of performing is to let people know who you are.  I can’t believe I’ve forgotten!  I know they’re Danish performers, and I thought I could google them, but haven’t found them yet.  I can only remember that the name of their circus troupe is a combination of their names together starting with a B (Billie?).

If you recognise these amazing performers, drop me a line. :) 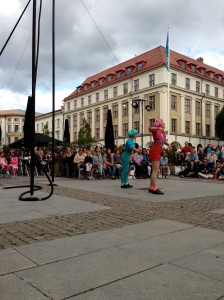